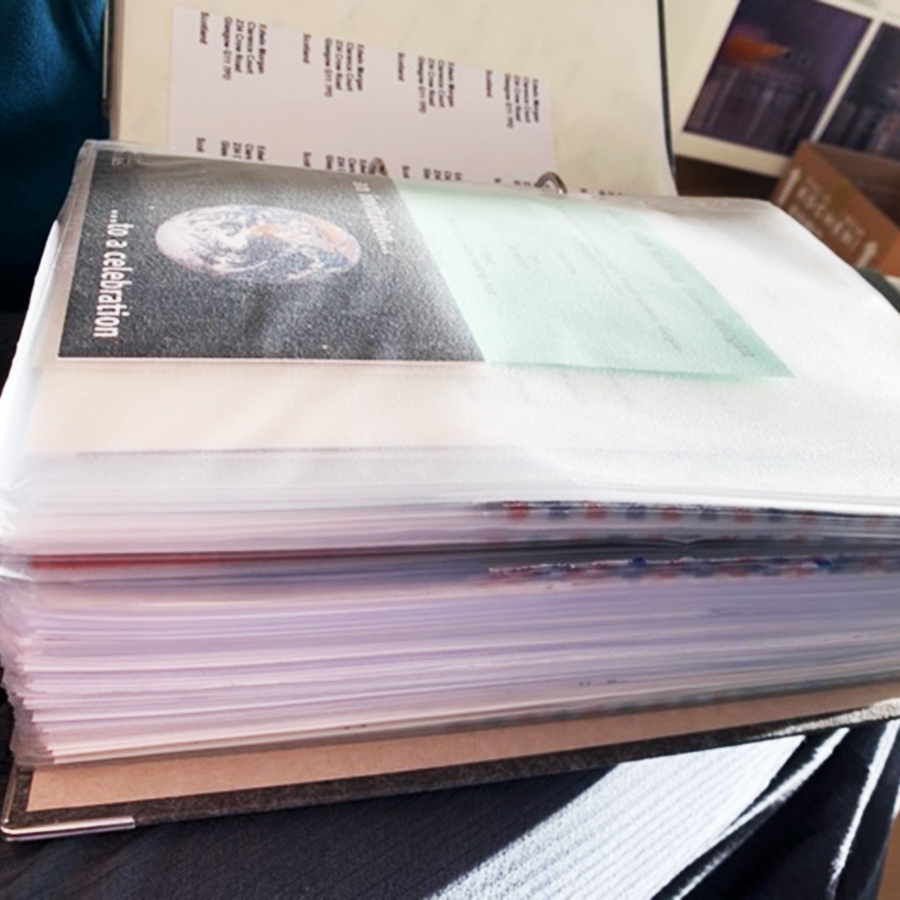 There is this huge folder on one of my shelves in which I am keeping all of Eddie’s letters. While the Special Collection of the University of Glasgow holds a folder with my original letters and photocopies of Eddie’s letters (he had his own photocopy machine, and would make a copy of the letters he had typed out with his type writer, an old Adler Bluebird, alternatively, he would use charcoal paper between two sheets), the folder on my shelf here in Dortmund is stuffed with Eddie’s original letters and copies of the letters I sent to him.

So today I shall take it off the shelf. I already did so a few weeks ago, but found it too much of an emotional strain then. (To be honest, I opened it, burst into tears, closed it, and put it back on the shelf.)

Yet somehow these letters and postcards and faxes with Eddie’s answers, explanations, questions, criticism, advice, reports on the weather in Glasgow and the updates on his health status still carry so much of his energy that I somehow think I shall begin this blog with an entry on them, even though it will be rather challenging for me to open this wormhole into the past…

So here it goes… What most people don’t know, is that it wasn’t me who wrote the very first letter to Eddie. That was one of my teachers at the Ruhr-Universität Bochum, John Poziemsky, who encouraged me to get in touch with my favourite poet, Edwin Morgan, as I was planning on writing my MA-thesis on his poetry.

I had become quite fascinated with Eddie’s work in 1992 when I lived in Dundee for about a year.

At the time I was very shy, and far too scared to get in touch with the poet whose work I was so enthusiastic about. Therefore, John offered to send the first letter to Carcanet Press Manchester (www.carcanet.co.uk) asking if they would be so kind as to forward it to The Poet himself. They did.

Eddie answered John’s letter on 24 June, 1994 on light blue airmail paper, which was thinner and lighter than white writing paper. As I learned later on, Eddie would have wee stickers with his name and address details printed to stick in the top right corner of his correspondence and on the back of the envelope. However, of this very first letter I only have a yellowed photocopy as John – quite understandably – wanted to keep the original. – My answer dates 6 July, 1994 because it took me a while to gather enough courage to write to Edwin myself. I even showed a first draft of that letter to John asking if the tone of it was alright… Those of you old enough to recognize the typeset will see that I printed it on my 9-needle-printer, a machine I was very proud of at the time.

The very first letter Eddie sent to me is dated 9 November, 1994. In between these two letters I took part in a summer school on the campus of the University of Stirling in the late summer of that year. From there I had taken a bus to Glasgow to visit Eddie in his flat in Whittingehame Court for the very first time on Wednesday, 24 August, 1994. I have already written about this visit in Eddie @90*, a Festschrift for Eddie’s 90th birthday.

Our correspondence in those first years was very sporadic, me asking questions about his work, him answering with some background information, references, an explanation of a word…

In 1996 I got my first fax machine, and we would use it to transmit letters, which made things quicker, but also more difficult to conserve as fax paper tends to fade and crumple after a while. (No worries! – I made photocopies and kept the copies as well as the originals.)

In 2000, shortly after Eddie’s 80th birthday Hartmut and I started edwinmorgan.com. Eddie loved the idea of being presented on the Internet, so when Hartmut and I suggested we come to Glasgow to take photographs of places that feature in his poems, he said “Yes!”, and we would spend two days with Eddie, Hamish Whyte and Jane Forrest driving around Glasgow and Rutherglen taking photographs for the website visiting many poem places, e.g. a snack-bar, and a jeweller’s store, and Duke Street and Glasgow Green and the cemetery and Rutherglen, and … well, you can still check out the photos in the older part of this website. – Can you connect them to the poems?

It was through this project that our correspondence gathered quite a lot of momentum as there was so much to ask and write and sort, and shortly after we’d got edwinmorgan.com up and running, something magical happened: People of all age-groups from all over the world would send e-mails with questions and/or comments on Eddies work. At the time I was rather anxious that they might get lost, so I printed out lots of them and stored them in folders in chronological order, but gave up doing so after a wee while as it was just too much paper to file.
I would either answer queries myself, if I knew the correct answer or copy the contents of the e-mail (often questions about one or more of Eddie’s poems) into a letter and forward it to Eddie via fax or sometimes snailmail or – in case it was something more urgent, I would call Eddie on the phone and tell him about it.

As his health at that time was still comparably good and he still lived in his flat in Whittingehame Court, he would either send me his answers rather swiftly via fax or snailmail. I would then answer those e-mails with whatever Eddie had written.

In later years, after his health condition had forced him to move into a nursing home, we’d often talk on the phone as he didn’t have the stamina to answer questions in writing, but he would still send me the occasional letter or card. The Trifid Nebula in Sagittarius was the last card Eddie sent me, along with “Love and best wishes and stardust” on 10 August 2005.

If you would like to re-publish some of these photos that’s fine as long as you credit edwinmorgan.com and/or @Claudia.e.Kraszkiewicz